The World's End -- A Delicious Comedy with an Existential Subtext 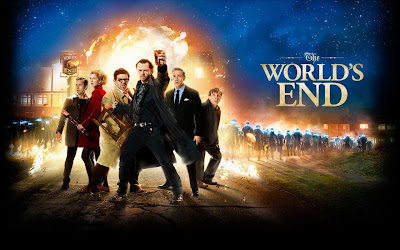 British film-maker Edgar Wright’s apocalyptic comedy “The World’s End” (2013) is the final installment of the beloved “Cornetto Trilogy” (named after the flavors of the frozen cone). The trilogy includes the zombie comedy “Shaun of the Dead” (strawberry red – indicates the bloody nature), buddy cop parody “Hot Fuzz” (blue – indicating cops) and the catastrophic pub crawl “The World’s End” (green mint chocolate clip – a nod to aliens). The name was developed from a silly joke and Wright has suggested this as a reference to Kieslowski’s “Three Colors Trilogy.” Although there are no similar elements -- except for ‘Cornetto’ – all these films feature a twisted, boozy, tongue-in-cheek humor. Written by on and off-screen buddies, Simon Pegg and Nick Frost, the latest installment is full of free-spirited nonconformist heroism.

Although the film lives up to its title, “The World’s End” is the name of a pub. It’s the 12th and final stop of the “Golden Mile” (a celebrated pub crawl). The 40-something Gary King (Simon Pegg) has nostalgic memories about the early 90’s. He spent his youthful heyday in the small town, Newton Haven. He liked to party hard with his four buddies. Sad thing is Gary still remains fixated on the night, where he and his buddies tried to conquer the ‘Golden Mile’ – taking a pint of beer at each of 12 pubs. Their booze marathon plans went awry, but Gary has savored that night. He is now an alcoholic misfit with no money. He behaves like a juvenile and has the same car playing the same cassette in its tape deck. After an AA meeting, he goes on to seek his old buddies and tries to recreate the whole scenario. 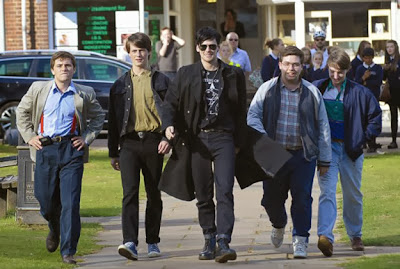 Andy (Nick Frost) is a sullen straight-faced corporate lawyer. Oliver (“Hobbit” fame Martin Freeman) is a real-estate business man. Steven (Paddy Considine) has a constructing company and dates a 26 year old fitness instructor. Peter (Eddie Marsan) is a family man and a soft-spoken car salesman. Gary meets each one of them and cajoles them into returning to the hamlet of Newport Haven. The happy trip down memory lane hits a brick, when Andy declares that he is now a teetotaler. He only drinks water as the other drink their way through 12 pubs. When Oliver’s sister, Sam (Rosamund Pike) stops at one of the scheduled pubs, resentments and rivalries steps up. However, their biggest problem turns out to be the unanticipated local folks, who were replaced by blue-blooded robot-like replicas.

Director Edgar Wright has the penchant for myriad details, from the barroom brawls to British Pop soundtrack. Exuberance is always Wright’s strong suit, which is abundant in “World’s End.” Structurally, all of his films look loosely-jointed, but we don’t care much since we're laughing so hard at each lively moment. Wright, who co-wrote the script with Simon and Nick, has retained the inherent wry humor. The script tries to get to the dark side rather than simply being a ‘parody’ of alien-invasion genre. It tries to capture the reckoning feel of middle-aged men, whose swagger has burned off. The trio’s gospel of the human right to ‘fuck up’ tries to break through the totalitarianism or status quo. It says something about the changed landscape of Britain as the much celebrated pubs in ‘Golden Mile’ are consumed by ‘Starbucking’ – bought by food chains and was made annoyingly identical. The breakdown of social order after an apocalypse is explained with excellent wit than all those high-budgeted Hollywood apocalypse movies. 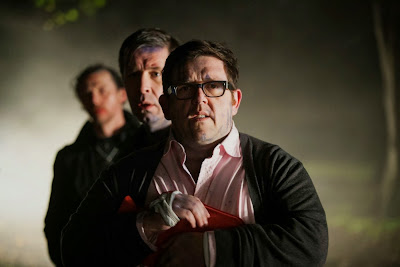 The central performances are once again bolstered by Simon and Nick, whose energy and chemistry keeps the movie afloat. The supporting performances are all done by heralded actors. Freeman has funny moments as the stuck-up realtor. Considine gives a fine low-key performance. For a change, Eddie Marsan plays someone who isn’t menacing or purely evil. David Bradley and Pierce Brosnan give sparkling performances in their cameo roles. Edgar Wright does an excellent in-camera trick in the pub fight, which pays homage to comedic genius Buster Keaton (choreographed by Jackie Chan’s longtime stunt coordinator)

The jokes have the same amount of profanity as heard in American main-stream comedy, but they are not offensive or loosely bundled.  Some of the spot-on reflections about the stupidity of male ego have a varying tone, which may shine on repeated viewings. Yeah, the movie’s final act is a bit sloppy; especially the conversation with “Network” seemed to be stretched-out. But, the epilogue is clever and has more thematic depth than one might expect.

“The World’s End” has some amazing tonal shifts and remains as one of the wisest apocalypse comedy movie. This pub crawl makes us crave for wilder doomsday premises from Wright and Pegg.

Interesting post! Thanks. Lots of players will want a piece of the vod pie. I think vod is just a small part of Amazon's total revenue model, for them its just a nice add-on, whereas for Netflix it is core business. stream movies