What Time Is It There? -- A Phenomenal Psychological Study of Grief and Loneliness 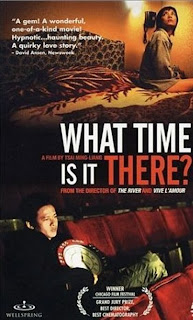 “Le Boucher”, “Mon Oncle d’Amerique”, “Pulp Fiction” and “Blue Velvet” are some examples of a category of films in which you feel that there is something to grasp among all the obscurities. They might fill your heart and mind with awe and suspense by choosing pace over delivery, even though we can’t get all the metaphors and in-jokes in the first viewing. Taiwanese auteur Tsai Ming-Liang’s fifth feature film “What Time Is It There?” (2001) is the perfect contradiction: it is completely sealed at times and is expressively open at other times. Is this an existential comedy or an underplayed melodrama? It is both. In fact, this surprising minimalist drama possesses lot of characteristics.

Alienation and loneliness are the most important themes of this movie. The director has incorporated heterogeneous methods of Jacques Tati, Robert Bresson and Yasijuro Ozu. He unleashes shock waves of comedy but the laughs never come at the expense of a deeply moving situation. Ming-Liang’s previous feature “The River” had the same cast and more or less similar roles. It also focused on the mundane activities and suggesting mystical links between seemingly uncorrelated events. “What Time is it there?” was shot without music and through its pace it proudly wears the art house credentials. 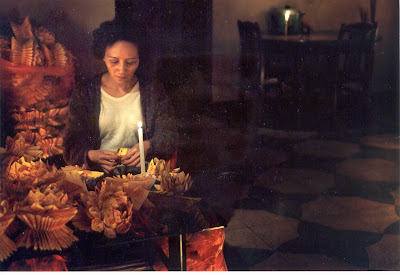 Hsiao-Kang (Lee Kang-sheng) is a young watch vendor. He sells his watches in a suitcase at the long stretch of open level ground near downtown Taipei. He is one of the world’s victims of the repetitive activity. He hardly sells a watch and looks out for whatever interaction that comes his way. The film starts with trapped, lonely scene of Hsiao-Kang’s father, whose face sags with misery, while exhaling plumes of cigarette smoke. The patriarchal figure soon dies and so Kang’s agitated mother (Lu Yi-Ching) is convinced that the spirit of her dead husband will soon return. Meanwhile, Hsiao-Kang is afraid to go to bathroom at night thinking that he might bump into his father’s spirit. He turns plastic bags and bottles into urine depositories.


One day he is approached by a young woman Shiang-Chyi, (Chen Shiang-Chyi), who wants to buy a two-time zone watch (she is about to leave for Paris). She is not impressed by the watches in suitcase but insists on having the watch Hsiao-Kang is wearing. He explains that she can’t buy this watch because it might bring her bad luck, since it comes from a house of mourning. However, Kang’s reluctance dissolves and eventually he sells the watch. For selling the watch, Shiang-Chyi gives a cake as a sign of gratitude and Hsiao-Kang’s world changes at the point. At home, the grief-stricken mother is plunging into insanity. She protects cockroaches in the kitchen thinking, it might be her father’s incarnation. She plaintively asks the fish whether it is her husband. 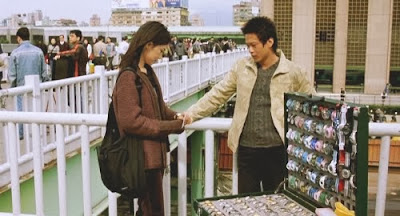 To escape from his mother’s indisposition, Hsiao-Kang starts roaming around Taipei setting the Paris time in clocks all over the city. He starts this ceremony by resetting the time in his house. The mother thinks it is a sign from her husband that she should cook him some dinner. In Paris, as an alienated tourist Shiang-Chyi similarly embarks an odd journey. Her adventures brings close some kind of revelation, but exactly what? – That I’m not sure.


Director Tsai Ming-Liang pays a lot of homage to French cinema. In the movie, Hsiao-Kang hunts for French cinema and is intrigued by Truffaut’s “400 Blows.” The cameo of “400 Blows” star Jean-Pierre Leaud in the Parisian cemetery is the perfect example for surrealistic moment in cinema. There are also references to Alain Resnais’ “Hiroshima Mon Amour.” Tsai’s predilection for stillness owes a lot to Robert Bresson. The solitude based on geographical dislocation reminds us of the European directors Wim Wenders and Kieslowski. Tsai’ directorial techniques hardly rely on dialogues. His austerely economical expressive framing tells a viewer that Tsai would have been a legendary silent film-maker (there is homage for Harold Lloyd too). 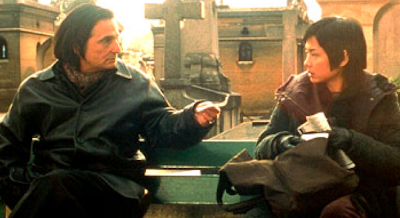 Tsai’s every frame is captivating. He and cinematographer Benoit Delhomme plants the camera somewhere and allows the action to unfold in its own meditational pace. The camera traps the actors and their tension within the frames. All of Tsai’s movies are known for the limited set of characters and for their fundamentally similar characteristics: isolation, frustration and sense of loss. Although Tsai ponders on limited subjects, he is not the repetitive kind. He takes all those similar elements and recombines them in a new way to give varying emotions and meanings. All the actors – professionals and non-professionals – embellish this movie with their contemplative performance, which remains open to interpretation and can be decoded by any cinephile with a patient mind.


Tsai’s morbid view of human nature also includes the burst of sexual activities that shakes the movie’s frigid characters. Yi-Ching’s self-pleasure (with the picture of her departed husband), Hsiao-Kang’s comfort with prostitute and Shaing-Chyi failed homosexual love session with a fellow Asian woman in Paris are all shown as an additional burden that the characters can’t seek to control. The ending is hopeful or can be explained as ‘spiritually cathartic.’ It is more dream-like, contradicting the film’s restrained tone. The surrealistic, wandering climax reminds us that human beings, not aware of their own existence or their looming demise are somehow similar to ghosts. 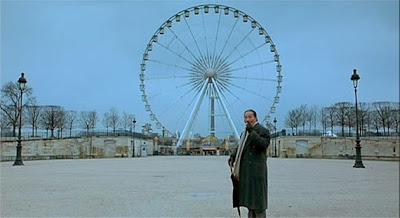 “What Time Is It There?” may not be easily loved when it is on screen, but it will definitely work its way around once you contemplate about movie’s theme after it is over. Great rewards and pleasure are waiting to be reaped, if you have enough patience.

What Time Is It There? -- IMDb

You seem to have a passion for foreign movies. I hardly watch any. Nice to read the reviews.

How do you manage to catch such great movies? I love the way you are very frank in your movies and always bring out both sides of the coin.

Looks interesting. Haven't watched any though! :)